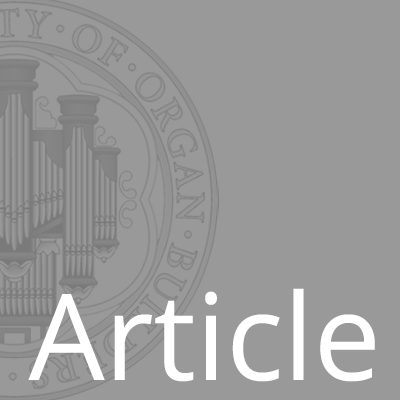 During the first half of the 19th century, the pipe organ was something quite different to the instruments constructed today. Almost two centuries worth of ingenuity and invention driven by desire and necessity have provided us with a wonderful rich heritage full of curiosities and marvels.

During the 1820s James Chapman Bishop was troubled by the unbidden evil of “unsteady wind.” To combat the problem Bishop employed a simple ingenious contraption, “The Anti-Concussion Valve.” This revolution in organ building enabled organ builders to reduce the problems caused by over and under compression of the wind. This undulation in the wind supply generally caused either at the source by the blowing apparatus or by the un-even distribution of the wind in the wind-chest during playing, causes the speech of the pipes to be affected, these surges or undulations, audible when playing the organ, sometimes minor but often extreme, especially with modern heavier pressures, are usually undesirable to the performer and audience alike. As far as can be ascertained, the first practical application of the new device was at St Paul`s cathedral in or around 1826.

The device consists of a board and either six or eight ribs forming either a small wedge or square drop bellows reservoir respectively. This apparatus is then fixed over and around a hole either on the wind trunk or the wind-chest itself. A spring is then fixed between a rail and the board of the valve. The spring is then so adjusted that it precisely balances the ordinary pressure of the compressed wind against the inside of the board. When the organ is blown or switched on and the `wind is in`, the Anti-Concussion valve is immediately charged and expands against the spring until the pressure expended by the wind exactly matches that of the spring.

If any jerking in the wind supply should occur, the anti-concussion valve should take up any slack in the wind or suppress any surges in the same. During any period where there is over compression of the wind, normally caused by a sudden reduction in the consumption of wind or bouncing of the bellows reservoirs, then the spring will give way in relation to this and the valve will open further. In doing this the wind is allowed to expand and thus the compressive action is reduced and its density falls to the normal amount, as a result any extra strength is dissipated instead of being applied to the speech of the pipes.

If under compression should occur due to a sudden demand in wind or a fall in the supply volume then the spring is caused to expand, collapsing the valve towards the closed position and in turn forcing the wind inside the device back into the wind supply to replace the deficit. All too often, Anti-Concussion Valves are rendered useless because they are incorrectly arranged; there is danger here that the action of the valve on the wind will cause more unsteadiness than would be present in the devices absence. It is vitally important that the following points are observed at all times.

The use of this method is all too often abandoned for ease or due to the ignorance of its benefit, indeed in recent times it has been suggested that it is un-natural to interfere with the wind in this manner and it should be avoided. It is not beyond imagination that organ builders have supported this notion because it is most expedient. There is no way around the fact that the foundation of any pipe`s speech begins with its supply of wind, it is logical therefore that we persevere in the supply of good steady wind. It was once important that the `blower` was skilled in the use of his feeders and surely it is now important that we are skilled in `smoothing` our wind supplies.